COVID-19 casts an unseen shadow over the Haridwar Kumbh Mela

Even with fewer numbers, SOP is conspicuous by its absence in this large congregation of humanity

Holding a pitcher in hand, Aniruddh Pandey, a priest outside the Ganga temple at Har Ki Pauri in Haridwar, put his finger on one-third of the vessel’s body. “This is the size of the Kumbh Mela and our work this year. It is only about sipahi (security staff), safai karmachari (sanitary worker) and sadhu (hermit),” he said sheepishly, bringing out a mask from his pocket when it’s absence is pointed out.

A few metres away, barbers shave the heads of the bereaved with not even one gaz (square yard) of doori (distance). “What to do, we have to make ends meet?” said Tushar Thakur. “During the lockdown, we decided that only 10 younger barbers would sit at Har Ki Pauri and they share their income with the rest of the community,” he said.

“Is the virus not spreading from rallies in Bengal?” asked one of the pandas (priests) who records devotees’ visits to Haridwar. “We have installed a sanitiser machine where yajmaans (patrons) are asked to take a bath but there are few takers.”

“These are strange times. You have to sanitise yourself before taking a bath in the Ganges!” exclaimed Sohanlal Sharma, a priest at the Shankaracharya Math temple, pointing to the sanitiser dispensers at the holy ghat. 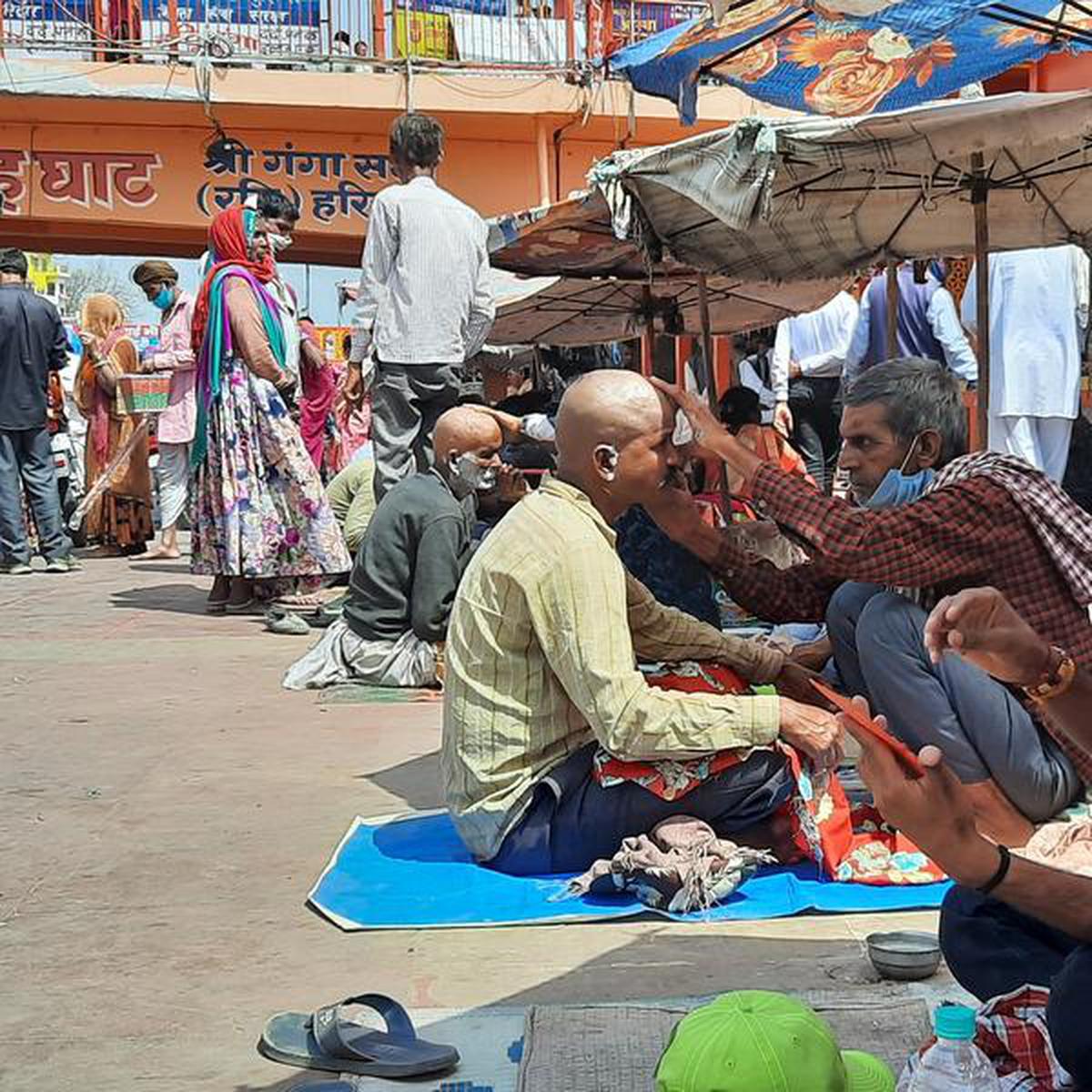 On Thursday, a day after the Uttarakhand High Court passed an order that said the Kumbh should not be allowed to become a breeding ground for the COVID-19 virus and that the standard operating protocol (SOP) of the Central government should be adhered to “in letter and spirit”, thousands took the auspicious Ekadasi bath in the Ganges, many of them without a mask and COVID-19 negative report.

The HC order said devotees should come to Haridwar with a COVID-19 negative report that is not more than 72 hours old. However, Kumbh Mela Adhikari Deepak Rawat said that, officially, the Mela would commence on April 1 as per the State government notification which, incidentally, also came on March 24.

Mr. Rawat said the SOPs would be publicised in other States so that those without the test report, “don’t make plans” to travel.

In accordance with tradition, the Haridwar Kumbh began on January 15 and five snans (holy bath), including the shahi snan of Mahashivaratri, have already happened. Observers feel that the stakeholders woke up when the cases rose in the week following Shivaratri. A Central government team reported that 10-15 cases were being reported every day.

Anoop Nautiyal, founder of the Social Development of Communities Foundation, a Dehradun-based think tank, said that had the government wanted the SOPs, they would have been implemented from January itself. Also, as the HC order pointed out, some of the critical COVID-19 related infrastructure such as a 550-bed hospital is not operational yet.

The order came after the newly appointed Chief Minister Tirath Singh Rawat made statements that rendered SOPs superfluous as he welcomed everybody. On March 22, the virus caught up with him and he isolated himself.

However, it appears that the message did not percolate. On Thursday, Banshidhar Bhagat, Urban Development and Housing Minister, held an official meeting without wearing a mask.

Refusing to comment on the Minister’s COVID-19 inappropriate behaviour, C. Ravi Shankar, District Magistrate, Haridwar admitted that checking reports at the border would be a huge challenge. “We have been reiterating it. We are putting up multiple lanes and creating holding areas,” he said.

He said the infection rate in Haridwar was much lower than the national and State average. On March 24, he said, 64 positive cases had been found, while on March 25, the number was 54. “There is a slight increase in numbers as we have increased our testing capacity from 2,000 to 6,000. We intend to ramp it up to at least 10,000 a day by April 1.”

The HC order said that 10 lakh people were expected at the Kumbh on regular days and 50 lakh visitors on snan days but officials feel, with no special trains this time, the numbers will be less. Mr. Shankar said that on Mahashivratri, the number of devotees was 32 lakh as against 45 lakh last year. “Apart from saints, who are being tested, not many people are staying back. On the five snan days, we have cumulatively tested 1 lakh floating people with rapid antigen kits and only 47 were found to be positive.”

Hari Giri Maharaj, general secretary of the Akhil Bhartiya Akhada Parishad said he had appealed to all the participating saints to get themselves tested at the nearest facility. “The akhadas will reimburse the cost of testing,” he said.

Meanwhile, at the sprawling Punjab Sindh Dharamshala with 300-odd rooms but no sanitiser dispenser in sight, Satyadev from Gohena near Sonipat has booked a room for two days for five members. “There is no COVID-19 in our area so there is no need for the test,” he said. Again, the mask was missing.

2021-03-27
Asmat Khan
Previous: Sthaayi theatre brings out its latest Tamil play Hayavadana in Coimbatore
Next: Only 5.4% of houses under Centre’s flagship scheme reached completion so far this year

This site uses Akismet to reduce spam. Learn how your comment data is processed.